Brussels Sprouts. To think I went 26 years of my life without them. Thankfully I sucked it up and roasted a pan of them 2 years ago…and then subsequently ate the entire pan in 2 days. These are one of my favorite winter vegetables. Roasted them in a no-fail way to win over non-believers. A friend of mine mentioned a shredded raw brussels sprout salad she made and it got me thinking that it was time to venture out. I wasn’t quite ready for raw sprouts, but shredded I could do. Then I found this delicious looking warm Brussels sprout salad over at a Beautiful Mess and I was sold. I made a few changes for what I had on hand and my personal taste. This recipe ends up being the best of winter with a touch of summer with the hint of lemon. 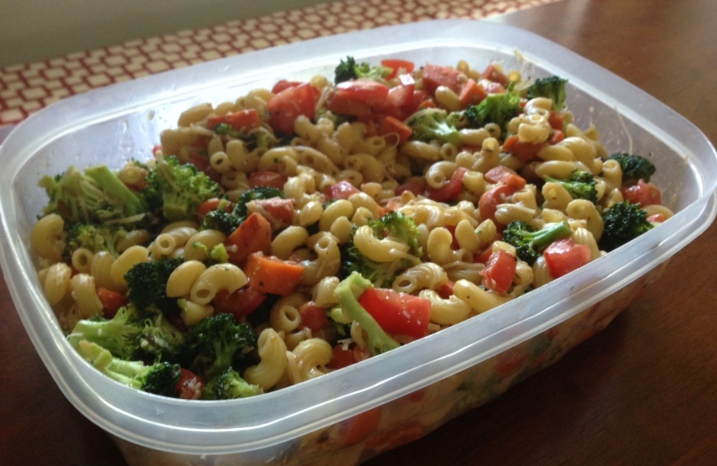 More cucumbers. and green beans. and broccoli.  and wax beans.

Sometimes (well, most times) I am not very creative in the kitchen. I wonder if there is really a point to posting about those times, because to me they don’t seem worthy of discussion. But then I was thinking about how many people don’t realize how simple it can be to whip up something healthy and delicious with random things you have one hand. In all honesty, before the CSA, I could probably count the number of “recipes” I followed for meals this year on one hand, maybe two.  Here is an example of one of my no-recipe meals. I served this with grilled steaks and fresh bread. 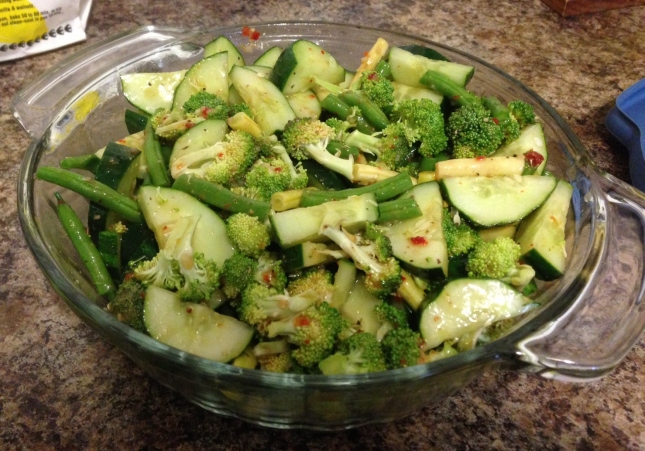 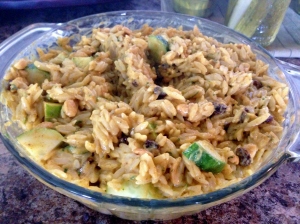 It’s that time of year when there are more cucumbers than you know what to do with. We had six in the refrigerator and I wanted something other than sliced cucumbers and pickles. I was going through an old cookbook with loose recipes inside and Cucumber Ranita fell out. I love when that happens. The recipe wasn’t quite what I wanted (cream, whole milk yogurt, spices I didn’t have on hand, etc…), I just used the recipe as an inspiration for this recipe. We served it at a family party a few weeks ago and it was a hit. 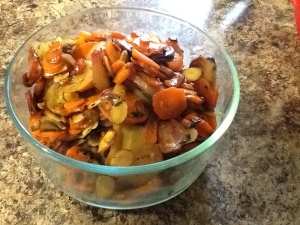 The past two weeks of CSA have included beets. I had posted I wanted to make Naturally Ella’s Roasted Beet and Carrot Salad both weeks, and we have – it is delicious! And super simple. The pictures in this post are from the first week, when the beets were pretty white. This week the beets were a deep, rich purple. The first time I made this I added some fresh thyme and sliced the carrots and beets. When J made is this past week he chopped everything into chunks and used more pepper. If you are adding spice, be sure to add them at the end of the roasting process – my thyme got an icky burnt flavor. 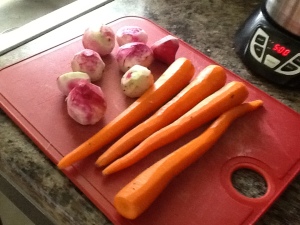 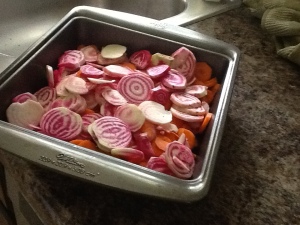 Between our CSA and garden, we have more sweet corn and zucchini than we know what to do with! We get a dozen ears of corn each week, which means J and I need to eat an ear a night…eek! The first week of sweet corn J was in CA and we were going out-of-town for the weekend. This meant I needed to single-handedly consume at least 8 ears in 4 days so we’d be on track for them to get eaten up within a week. I rarely turn down challenges, so I managed to eat corn 2 (sometime 3) times a day while J was gone. There were only 2 ears left when he got home 🙂

After that corn-filled week, I decided it was time to mix things up a bit. There was no way I was eating corn everyday for the rest of the summer. We had a few ears with dinners during the week, but then I decided to cut the kernels off the cob and use them in a few recipes. I also had a ton of zucchini on hand, which I had shredded up when I made Ambitious Kitchen’s Zucchini Brownies. The brownies only used a cup, so I was left with 3 cups of shredded zucchini.

So now I was left with 3 cups of shredded/julienned zucchini and 5 cups of fresh sweet corn. Now what?? First, came a salsa-dip inspired by Smitten Kitchen’s charred corn tacos and zucchini-radish salsa.  I didn’t have any radishes on-hand and we were having a cookout in a few days, so I opted for making a dip instead. I will hopefully post that recipe soon. Then came corn and zucchini cakes, inspired by this post on Serious Eats‘ and this post on Whole Foods‘ blogs. I pretty much used serious eats’ recipe as the flavor guide and whole foods’ recipe as the logistical guide. 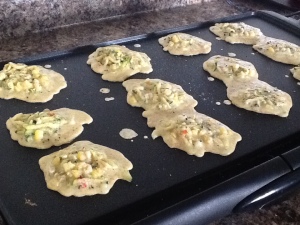 *I was worried about the centers being done, so I ended up putting the finished cakes back on the griddle once they were all done.

We no longer have a griddle so I decided to attempt a baked version. I hadn’t been super happy with the rubbery-texture last time, so I decided I would try a modified recipe. The end result was great – our daughter couldn’t get enough!

This salad is super easy and delicious. I made it up the other weekend before going to my parents for family night. I don’t know if it is the traditional three bean salad because I’ve never looked up the recipe, but J said it reminded him of it. I am horrible at measuring things, so the dressing is just an estimate,

Directions
1. Place the beans lengthwise into a food processor feed tube (I have no idea what this thing is called) and slice thinly.
2. Combine all of the vegetables into a large bowl.
3. In a small bowl, whisk vinegar, sugar, and pepper. Pour over vegetables. Let sit in the refrigerator for at least 1 day before serving.