As I’ve mentioned before, I started Eli on a hybrid of BLW. I have a little issue with messes, so baby cereal wasn’t really on my radar for a BLW item. While he was getting some red meat and spinach, his iron intake was pretty minimal. I am breastfeeding, so by 6 months he really needed an iron supplement. I did introduce some spoon-fed iron-fortified cereal, but there were so many other real foods I wanted to give him, that I decided to get him an iron supplement. Well, until he tried the supplement – and proceeded to vomit it everywhere (and stain his cute PJs). So, back to the iron cereal, right? Wrong. Turns out I can’t make it thick enough for him anymore – if it’s thin, he gets mad he can’t chew it and just plays with it in his mouth, spitting out most of it. And he’s started to grab the spoon to feed himself. Which works great when something solid is on the spoon, but not so great when it’s a runny mess. But then it hit me – make infant cereal muffins. I did a little search and there are a few people out there who have done it already, but none of them put iron supplement in theirs. I asked an RD friend who confirmed I could cook with the supplement, so I was set. The end result – nothing you’d buy in the store, but perfect for Eli. It was bland (which is what you want for infants) and had a strange greenish-brown color, but it didn’t taste much like iron and he loves them. I put them in mini muffin tins, so he is able to handle the whole muffin all by himself. Each one has about 75% of his daily iron needs, so I’m satisfied with not having to force feed him any other iron supplements. I kept 5 out for the week and froze the rest, with the plan of just taking them out when I need them. 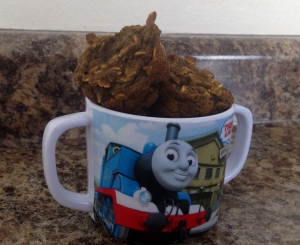 Notes
– I noticed that these took awhile for the center to be completely done. Be sure the tooth pick comes out clean! If you used instant oats instead of old fashioned you might have better luck – let me know if you try this!

– Technically babies aren’t supposed to have eggs until 1 year – use at your own risk.